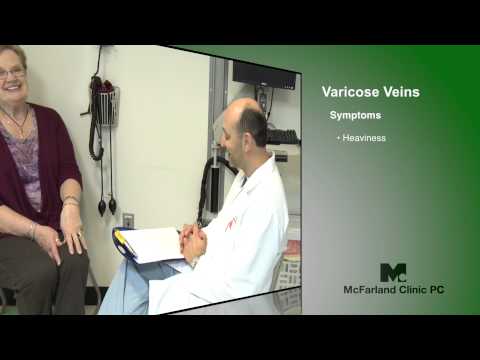 Varicose vein treatment. Ruth Purvis says she was tired of her swollen feet. I didn’t like the fat ankles. I just, it hurt. It just didn’t feel good. She was surprised when her doctor suggested that she visit the Vein Clinic. It never occurred to me that my veins could be causing my feet and lower part of my legs to be swelling like they were.
[WPXperVideo id=13 ]
During an exam, Dr. Firas Salti confirmed that varicose veins caused the swelling. Most patients don’t know, actually, what are the symptoms of varicose veins. Part of the reason is that they’ve had them for a long time. They’re used to them. They think that’s how legs feel after standing for a long time. Symptoms for varicose veins include heaviness, burning, aching, tiredness, or pain in your legs. They also include swelling in your feet and
ankles and itching over the vein. Dr. Salti recommends laser ablation for patients like Ruth.

The procedure takes about an hour. We make a small incision and access the vein and our ultrasound, and insert a laser fiber that, beginning usually either middle of the knee or above the knee, goes all the way up to the groin. The only pain I think I had, and I wouldn’t even call it a pain; it was more of a pin-stick, was when they gave me the numbing medicine. Ruth Purvis said it was an hour well-spent. Well, it seemed to me it was almost immediate. It was lessening as it went along. As far as mobility and everything, I had no problems. I could’ve gone out and gone shopping.

Ruth had her other leg treated the next week. Just two months later, she’s able to enjoy playing outside with her dog, Bailey. And the best part of the procedure? I get up in the morning, look down, and I have ankles.